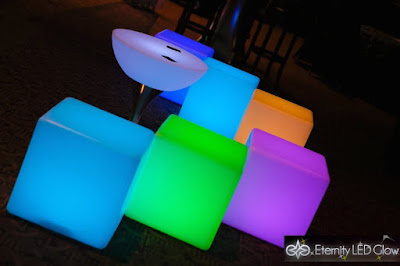 Decorative LED Furniture: Inside, outside, special occasion and everyday décor can benefit from the fun, colorful light of LED furniture. Eternity LED Glow offers several options, from light-up columns and cubes (they make great end tables and even extra seating), to decorative LED balls. Light-up furniture will brighten the mood, enhance the fun-factor, and provide a unique way to light and live in your space.
Posted by Unknown at 9:18 AM No comments:

Decorate with LEDs this Halloween
It’s almost here—are you ready?

Halloween is just around the corner, and it’s not too late to bring the magic and mystery of the season to life with some LED decorations from Eternity Glow. We have lots of options for both indoor and outdoor lighting that can look eerie, ethereal, and other-worldly, and whether you’re planning a party or just want to deck out your house for trick-or-treaters, we have just what you need!

Check out our LED Flower Pots and LED Light Up Cubes below for some ideas!

There are dozens of ways to make use of our LED Flower Pots during Halloween. One of which, of course, is with plants! Our 31” Light Up Flower Pot is large enough to hold a small tree, which opens up all kinds of possibilities. You can hang spooky decorations from the branches, or cover the tree with cobwebs—you’ll love the way the light reflects on the gauzy material, especially if you put the flower pot on a rotating light show! Our Flower Pots are waterproof and durable, meaning they could make perfect porch decorations.

You can also use our 9” Light Up Ice Bucket or 11” Square Light Up Flower Pots for handing out candy to trick-or-treaters, or for setting up a spooky glowing table display for snacks and drinks at your party! And because all the flower pots are leak-proof, you can turn them into ice buckets for soda, beer, or champagne!

[gallery of all three cubes]

Our LED Light Up Cubes are our ultimate party decoration. They’re available in three sizes, each of which has 16 different colors of LED lights inside, and can be set to four different modes (including the ultimate haunted house effect, strobe).

Our favorite Halloween idea for our LED Cubes is to pair them with either a smoke machine or dry ice. The effect of LEDS with smoke is magical and unforgettable. We recommend dry ice over fog machines because the smoke will kind of rest along the floor rather than dispersing through the air, but either will look amazing and surreal, and if you use both, you’ll have the spookiest party under the Halloween moon (and also an unbeatably mysterious dance floor!). Our 12” LED Cube Seat is the perfect way of simultaneously lighting up the fog with a beautiful array of swirling colors and also giving people a place to sit that’s easy to find through the haze.

Another fun Halloween idea for our LED Light Up Cubes is creating changing LED jack-o-lantern faces with them! You can cute a face (or maybe just eyes) from a dark cloth and drape it over our 8” LED Cube Lamp to create a spooky and inexplicable glowing grin. Use our larger cubes to create even bigger creeping monsters! Because our cubes last for ten hours and are completely waterproof, you can set your faces high in a tree, under the brush, or in the yard for a haunting image that can flash, glow, or change color. It’s a  lot less messy than cleaning out a pumpkin, gives you a lot more options, and becomes a cool lamp for the rest of the year!

Check out the video below to see more of our LED Light Up Cubes in action, and call us at Eternity LED for all your LED product needs! Happy Halloween!

Email ThisBlogThis!Share to TwitterShare to FacebookShare to Pinterest
Labels: LED Light up cubes 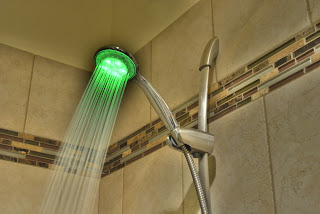 "The water color is transparent and always will remain so, what if you can change it? And, make your shower cooler, fun, safe, and motivates children to take a shower. So with this new LED Shower Head now you can. The LED Shower Head is a Patent genius that illuminates your shower and changes the color of the water depending on the water temperature! Green (cold water), blue (warm water), red (hot water), flashing red (boiling water), no battery needed.
The LED Shower Head is not only a cool gadget but is also made strong for long lasting and from high quality materials that will guarantee an enjoyable shower experience. The LED Shower Head is a standard shower head that can be replaced instead of any other shower head, the installation is very simple and easy about 10 sec and you are ready to go. From the use and the opening of the water tap, a built-in temperature sensor in the handle, will detect the water temperature and will light up respectively: Green color for cold water, blue for warm water, red for hot water and flashing red for boiling water! In addition what that is so amazing about this product that the LED lighting does not need an external power source (no battery needed). Using advanced technology the LED Shower Head uses the water flow to generate electrical power that illuminates the LED

Posted by Unknown at 7:44 PM No comments:

Are you a fashion icon? Do you set the trends that others follow? Always on the lookout for amazing stuff to wear to raves and parties? If that sounds like you, this LED Light Up Tongue Piercing is the perfect next addition to your wardrobe.

Our surgical grade, stainless steel barbell Tongue ring is the right accessory for any ensemble. It looks great by day, but at night, when the three bright RGB LED lights begin to cycle through the entire spectrum of color, it really stands out.

It's perfect for events like raves or parties, but great for everyday wear, too. Our LED body jewelry makes great gifts, so buy several and give them to your friends who love to show off their toned tummies with great belly ring jewelry! Every piece of body jewelry we offer is made from the highest quality materials, and the LED lights are energy efficient and long-lasting, so you can enjoy them for a long time before you have to change the batteries.

This great glow tongue piercing features a 3/8 inch light that comes complete with batteries. Just put in the tongue ring, screw it on, and enjoy the light show! Get your today, and set the next trend in led light up tongue piercing fashions!

Posted by Unknown at 1:15 PM No comments:

Summer is the season of music festivals. You’re probably excited about the trip you have planned to see all your favorite artists sharing one stage, or camping out with your friends and thousands of other music lovers for an immersive multi-day experience. Maybe you’re staying local and enjoying the great music being brought to Seattle. If you’re as excited as most festival-goers, you’re probably already packing your bags or planning your outfit in your mind. But don’t forget the most important thing: accessories. Half the fun of a good festival is looking the part, getting outrageous, and letting your freak flag fly. Here at Eternity LED Glow, we’ve got your must-have list of light up accessories for these summer festivals.

Capitol Hill Block Party
July 24th-26th
Seattle, WA
About: This 3-day festival celebrates Seattle’s iconic center of arts, music, and culture: Capitol Hill. Bringing in a diverse set of musicians, this weekend neighborhood party is a great place to see local talent and international favorites side-by-side. And if you’re lucky enough to have one of the many businesses or apartments overlooking the festival, why not deck out your digs with some LED swag and enjoy the view.
Must-Haves: LED Strip; LED Furniture; Beverage Glass

KUBE 93 Summer Jam
June 20
White River Amphitheatre, Auburn, WA
About: This one-day festival hosted by Seattle’s favorite hip hop radio station brings some of the biggest names in top 40 together for one night, including T.I. and TECH N9NE. Coordinate your colors with your crew, or just show off with your own glowing accessories.
Must-Haves: Multicolor Armband; Flower Belly Button Ring; Belly Ring

Paradiso
June 26-June 27
The Gorge, WA
About: Paradiso is the Pacific Northwest’s premier dance party escape. Located in the beautiful natural setting of the Gorge Amphitheatre, this weekend party draws over 20,000 EDM fans ready to dance the night away. Because this is a camp out, use overnight accessories to keep the party going in the tent!
Must-Haves: Light Up Teddy Bear; Light Up Couch Pillow

Decibel
September 23-Sept 27
Seattle, WA
About: It may be at the end of festival season, but Decibel is Seattle’s most world-class, high-profile electronic event of the year. This techno-heavy music festival takes over Seattle’s major venues for four days, draws over 25,000 people every year, and goes until about 6 a.m. When you’re at the underground after-hours events, BYOB with style.
Must-Haves: Drinking Cup; Shot glass; Freezable Ice Cubes

Electric Daisy Carnival
June 19-21
Las Vegas, NV
About: This is the ultimate spectacle. Nobody does it bigger and brighter than Las Vegas, and the Electric Daisy Carnival is no exception—the ultimate raver destination, this no-sleep weekend will be full of flashing lights, deep beats, and some of the most elaborate stage designs you’ve ever seen. Stand out in the crowd with a dazzling LED look.
Must-Haves: Light Up Leg Warmers; LED Earrings

Pitchfork Music Festival
July 17-19
Union Park, Chicago IL
About: This music festival is perfect for snobs who still love pop. All the best indie acts in the country will be featured, and everything that’s hot and trending will be on stage, so you better look just as good! You rockers out there can stand out with LED gauges, and our light-up batons are this generation’s answer to holding your lighter in the air.
Must-Haves: LED Light up Ear Gauge Plugs; Light Up Foam Stick Baton

Tomorrowland
July 24-26
Boom, Belgium
About: This is the largest electronic music festival in the world—in 2014, over 400,000 people attended. If you want to be a part of something spectacular and truly international, this is the perfect destination. Tomorrowland draws the biggest DJ names in the business, but the underground acts are the real gems. You’ll be dancing until dawn, so be sure to pack some LED items that will make the most of your movement on the floor.
Must-Haves: Poi Ball; Light Up Gloves

Ozora Festival
August 3-9
Ozora, Hungary
About: This picturesque Hungarian village is transformed for one week a year into the world’s biggest trance and psychedelic music festival. Camping is free, community is key, and the exchange of artistic ideas reigns supreme. Use our LEDs when you bike around the countryside, show off your pet, or go for a swim—this festival is as much about the outdoor exploration and beautiful pastoral setting as it is about the music.
Must-Haves: Light Up Waterproof Balls; Dog Collars; Bike Lights

Hi there!
I'm a freelance writer who recently started covering electronic music at the Seattle Weekly. We've never officially met, but I saw you play to like less than 10 people at an ArtAche a while back, and absolutely fucking crush it, and saw you again later. Hi there!


I'm a freelance writer who recently started covering electronic music at the Seattle Weekly. We've never officially met, but I saw you play to like less than 10 people at an ArtAche a while back, and absolutely fucking crush it, and saw you again later at the Cockpit. I'd like to write a feature on you
Posted by Unknown at 4:07 AM No comments:

Email ThisBlogThis!Share to TwitterShare to FacebookShare to Pinterest
Labels: Music Festival Must-Haves to Elevate the Experience 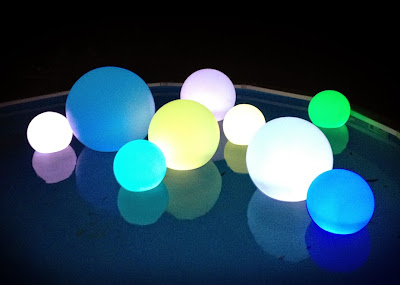 Posted by Unknown at 2:38 PM No comments: 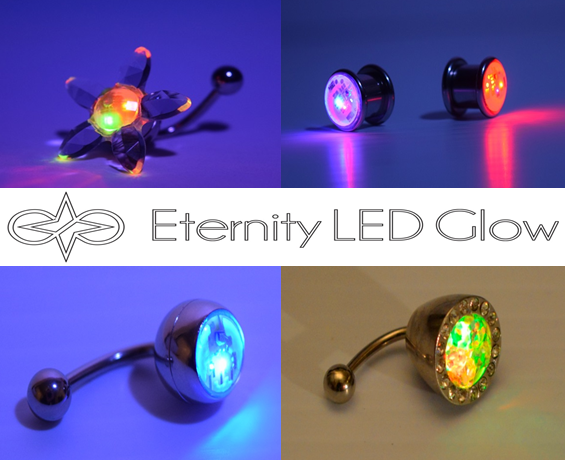 body jewellery store where you will find products including body jewellery, piercing tools, fashion accessories at low prices
Posted by Unknown at 12:30 PM No comments: